This engraving illustrates many aspects of the lumber and rafting industry of the time. Sections of the engraving have been enlarged to make some of the details clearer.

[Grand Rapids; a place I think then of about eight hundred inhabitants, with three or four saw mills; and the principal industry was lumbering. (Brazeau)] 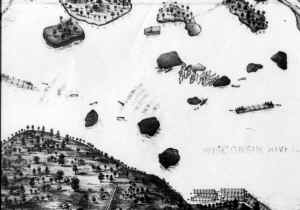 The main rapids are on the left side of the image. One raft is entering the lower rapids, while another has just exited them and is heading for the Eddy on the east shore. Rafts often tied up in the Eddy to wait for the rest of their fleet to pass the rapids. The combined fall was known as the Grand Rapids and was the head of navigation, even for shallow draft vessles. The 1904 Consolidated dam drowned them. Downriver from one of the now vanished islands, a skiff waits to recover crew in case of an accident.
[After they got down below the rapids, the main rapids, they generally pulled it at the bridge at Wisconsin Rapids and laid up again. And sometimes they would pull in at the bridge, and the water would get away from them and they would stay there for a number of weeks, waiting for water to get below them. (Brazeau)] 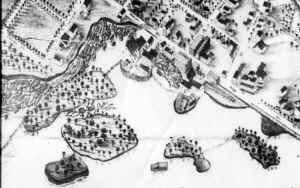 Several companies were located on islands near the rapids. They used small dams between the island and shore or between the islands to generate water power. In 1874, this seems to have included a saw mill as evidenced by the log booms and stacks of lumber. These islands were later occupied by the Nash Mill; Paterick & Mahoney's Machine Shop & Foundry and the Pioneer Wood Pulp Co.  There is a Sanborn map from 1884 that shows the number of small dams and companies that used the power thus generated, as well as later ones from 1891, 1895, and 1902. By 1909, the maps reflect the advent of consolidated water power.
[These logs were hauled to the mill pond and rolled in and logs taken from the pond up a log slide to the carriage floor and there sawed. This lumber was then loaded onto small cars and pushed out into the yards and piled for seasoning. (Taylor)] 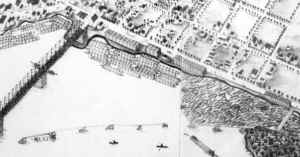 Just downriver from the bridge (current Grand Avenue) are a series of booms. These were used to steer the logs to the east side of the river where they were held between Belle Island (known then as Neeves Island) and the shore.
[Then right below the bridge there was a place below there called Neeves Island, and there was a series of rapids there which were very bad, but not as bad as Grand Rapids. The rocks were not as high; but when the water was down you didn't have a good stage of water, you couldn't make it over there at all because the rocks are almost continuous. They are there yet. When they pull the head of South Side Dam down, those rocks are sticking up there, and you can't go down even in a row boat. I have tried it. I might have gone down with the water high there. You can hear the roar of that rapids for half a mile away. They couldn't get over those rapids in low water. (Brazeau)
The lumber that "went down the river" went into the rafts fresh from the saw mill. On the way down the river, the drive would encounter booms across the river in different series and in the center of these would be a "sorting works". This would be a set of gates and as the logs came down to this gate the drivers would pike pole them into the different gates according to their log marks. Some booms would carry their individual owners logs direct to their several mills, while logs intended for farther down the river would be run into the main gate out into the main channel to encounter similar sorting works farther down. This sorting was done by the boom companies chartered for that purpose. (Taylor)] 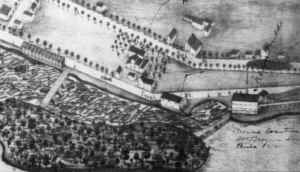 At the downstream end of Belle Island (Neeves Island) was a saw mill. Note the dam between the island and the shore, which provided the power for the saw mill. This mill does not appear in the 1884 Sanborn map. The stacks of lumber on the shore are probably not to scale, but must have been very large.